We will rot away if we try to take a shortcut along the path
to creating more space for something new and beautiful to emerge.
When it’s Time, it’s do or die. It’s do AND die -
the old layers that are asking to be cleared by our “doing” have already “died”.

It's time for renewal 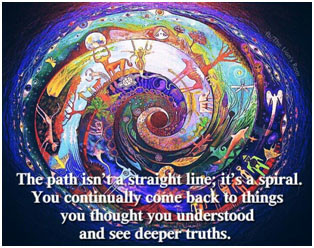 Funny thing, I thought I was finished raking the leaves out of the hedge bed in preparation for this year’s spring mulching. I’ll admit my time was limited and my typical perfectionism about paying close attention to detail was quite pleasantly on retreat. Contrary to my typical Virgo-Capricorn nature, I’d had a rare and rather freeing thought that I could just leave behind what was very hidden from view in between the hedges and deep underneath in the gnarly branches and in the recesses, making sure I did a good job in the front, around, behind and underneath just far enough to where the eye can see. After all, there’s nothing inherently wrong with leaving leaves behind. Left alone they decompose quite naturally and make great mulch themselves. I figured if I don’t see it (which I really didn’t), then no one else will. I felt good about the job I did and looked forward to coming back the next day to mulch it and make it all pretty.

Ahhh, but nature is our messenger and teacher and reminds us of many things! During the night we had a nice drenching spring rain with a little wind. So, the next day, when I went back out to mulch I noticed that quite a few leaves had been disturbed by the rainstorm and floated up from underneath and were now resting on top of the hedges. No big deal, I can just shake those off. Then, as I stood back to get an overall view and perspective of where I needed to mulch, and then, as I stooped to spread mulch in front and underneath, suddenly everything that I’d left behind yesterday in the deep, invisible spaces was VERY visible to my naked eye today.

Just like life, I thought. Layers and layers reveal themselves and beg for our attention just when we thought we were all done and ready for the next step.  What I didn’t see yesterday is suddenly staring me in the face.

I felt the heaviness descend upon me as I surrendered to accepting a more challenging task than I thought was mine for this day. I began raking deeper into the roots of the bushes and clearing the small pathways between them that keep them separate enough from each other as their own bush and yet on the surface they connect enough to appear as if they are one long singular unbroken hedge. I pondered the symbolism here of the “individual and the one” and how we really do need to keep our own roots and the pathways between each other clear and free so that we can then reach up higher and share a unified connection together to create more beauty, ease and grace in the overall flow.

As I worked, I thought about how many times we dig in and get dirty and give it all we’ve got, in the time we can, with the energy we’ve got, and the birds-eye view and perspective of the moment to clean up and pretty up the parts of us that are the most obvious to us and most easily seen by others. How many times do we walk away feeling satisfied and confident that “we’re done with that”. Why can’t we just leave whatever residue might still be hiding in those dark, wet, molding spaces and places in between the roots and the gnarly branches that no one wants to get close to or look at anyway? Why can’t we just cover it up with something fresh and pretty and just let it rest in hiding until it rots away?

Because we will rot away if we try to take a shortcut along the way to creating more space for something new and beautiful to emerge. When it’s time, it’s do or die. It’s do AND die - the old layers that are asking to be cleared by our “doing” have already “died”. It’s time for renewal.

One way or another what’s hidden, dead or dying will rise to the surface and ask for our attention. Something unexpected from inside or outside of us may come along to stir it up. Maybe a storm; maybe a gentle rain to cleanse it and make it more malleable; maybe a little wind or a lot of wind to move it around and leave a trail.

And wouldn’t you know, because we really did a good job clearing what we could see or we were willing or able to clear the first time around, we created just enough room and space for the next layer to float up to the surface. Once we start the process, there’s no turning back. So we get to go back in again, dig even deeper, and create an even more open and fresh space for the next new layer of beauty to shine through.

So that pile of leaves in this picture is what I raked up or hand-picked from the deep, dark, gnarly recessed crevices of the hedge-bed and it’s roots today. It’s not a very big pile really - not nearly as big as the day before - but it had a big message for me: 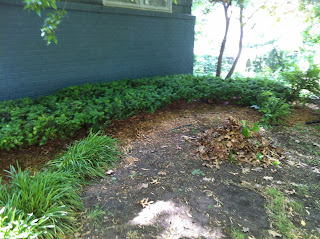 Life is a many-layered thing. You don’t see the layers until you’re ready to see. All the elements in time and space, nature and nurture, heaven and earth conspire together to bring each layer into your visibility in your most unique and divine timing according to your vision and perceptions. Your efforts are always good enough. There is no failure in yesterday’s efforts because there was “more” left behind. Today is not better than yesterday because you went even deeper and it was harder and messier and now it’s even cleaner than yesterday. Every day is perfect when you view it in the moment from right where you are. When you tend to what is visible right now with awareness, action, commitment, care, and humility and you remain willing to go back again and again and dig deeper, it’s always good enough. As many times as the leaves reveal themselves to you, you say “I see you ~ thank you for showing yourself to me ~ I will release you now” ~ and you go back and you dig deeper. Remember, every single leaf does not ask to be cleared - some will choose to remain behind and become the mulch naturally, organically; others will reveal themselves and ask to be appreciated, acknowledged and removed to make space for the new. Both ways are gifts and You will know how deep to go and when if you are looking and listening from an open heart and a quiet mind [and offering it all to the Divine].